Baden Street Settlement:  One of the First, One of the Largest, and Still Serving the Community

What is a Settlement House? 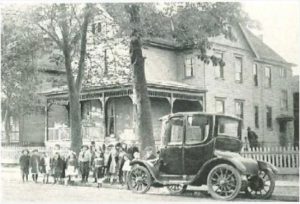 In these centers, immigrants participated in English and other classes, were active in clubs for sewing and other events, and enrolled their children in day care and kindergarten. The numbers of houses grew rapidly in the Progressive Era — More than 100 houses formed by 1900 and more than 400 created by 1910.

The History of Settlement Houses

In the late 19th century, the number of immigrants moving to America increased greatly, forcing most to live in crowded, unsanitary conditions in inner-city tenements and work long hours in dangerous factories. These challenges coincided with a growing population of educated, middle-class women whose Victorian upbringing limited their sphere to the family and home. Visionary female reformers restated this norm to include all families in need. The original settlement house was Toynbee Hall founded in 1884 in London established by Canon Samuel Barnett. The most famous such house in America was Jane Addams’ Hull House in Chicago, founded in 1889.

The settlement houses often employed middle-class women educated in social work to direct the programs of the houses. The staff of the settlement houses usually consisted of female volunteers crossing socioeconomic boundaries to help the immigrants. Typically, the leadership developed flexible programs that were based on the needs of the community. They were taught homemaking skills like sewing and lace-making to get them ready for employment and transition into the American culture.

Seeing needs in the working-class neighborhoods drove the women reformers to push for national laws regarding child labor, working hours and conditions. Other reformers negotiated with local governments for better city sanitation and regulation of housing standards. 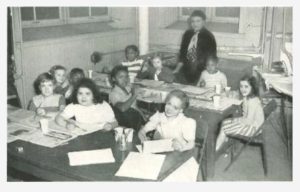 “The group work concept actually developed out of the settlement houses,” says John Ramey, general secretary of the Association for the Advancement of Social Work with Groups, which includes many settlement workers. Ramey once headed the Neighborhood Settlement in Akron, Ohio, and worked in other settlements.

The “Settlement House” was at one time practically synonymous with social work in this country. The movement began officially in the United States in 1886, with the establishment of the Neighborhood Guild, later called University Settlement, in New York City. Its founder was Stanton Coit.

America’s most famous settlement house in Chicago, Hull House, was the creation of Jane Addams, later a Nobel Laureate for Peace, and Ellen Starr. Established in 1889, it was intended as a place where the two women could share their knowledge of art and literature with the people surrounding the institution, mostly immigrants.

The enterprise expanded well beyond their expectations. Because the people who came to participate in their activities brought along so many children, the Hull House then began a kindergarten program. Many more clubs and activities developed–some planned and some impromptu. The flexibility and responsiveness of Hull House became the hallmark of settlement houses.

“It started with immigration, but it was also on the cutting edge of social reform and child welfare,” says Bernard J. Wohl, executive director of the Goddard Riverside Community Center on Manhattan’s Upper West Side.

The old settlements taught adult education and Americanization classes, provided schooling for the children of immigrants, organized job clubs, offered after-school recreation, and initiated public health services. They offered trade and vocational training, as well as classes in music, art, and theater. They combatted juvenile delinquency and gave recreational opportunities to the youth and the elderly. 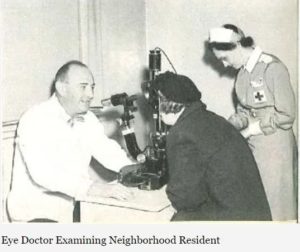 As the settlement movement spread throughout the United States, it took root locally here in Rochester in 1901 thanks to the pioneering efforts of two members of Temple B’rith Kodesh, Therese Katz and Fannie Adler Garson.

In 1901, Baden Street Settlement is first established on Gibbs Street where Mrs. Katz and Mrs. Garson facilitated cultural, practical, and social education to young (typically Jewish) women immigrants new to America. Therese Katz was a volunteer teacher. Fannie Garson was the daughter of one of the city’s largest clothing manufacturer’s in Rochester. Our founders possessed a sense of social responsibility in their desire to teach immigrant women the basic tasks and responsibilities of life in the United States.

Settlement houses served as centers of activism for working women and were a product of a turn-of-the-twentieth century reformist social movement. For many working-class immigrant women, settlement houses offered a convenient place of refuge, providing them with meeting spaces and a place to socialize.  The Women’s Educational and Industrial Union helped to finance the establishment and maintenance of Rochester’s two largest settlement houses. The settlement coordinated activities like evening classes and dancing twice a week for Eastern European immigrants who populated the city’s Jewish Eighth Ward.

As the settlement expanded, so did its programs.  In addition to social and athletic activities for children, it hosted an informal kindergarten, public bathing facilities, a day care center and the operation of a “milk station” to distribute safe milk to neighborhood children.  Rochester settlement women championed social and political reform.  Their concerns included the abolition of child labor, obtaining desirable legislation as tied to women’s workplace conditions and political rights, and awakening the membership to its responsibilities as intelligent voters. 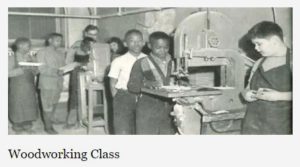 Baden Street Settlement has continuously and dynamically grown to provide a full range of services and facilities to improve the social, educational and cultural conditions in its community, to relieve human suffering and to foster the growth and development of its participants and community. It was incorporated May 4, 1901 as the “Social Settlement of Rochester,” and received its initial funding from the United Way in 1918. In 1922 the Social Settlement of Rochester became Baden Street Settlement.

Baden Street Settlement is one of the largest community outreach institutions in Rochester and one of the oldest in the United States.

First generation volunteer workers of these settlements  sought to ‘Americanize’ recently arrived immigrants by providing them with language and civics instruction, as well as training in basic work skills and homemaking tasks such as cooking and sewing.

Katz and Garson had been giving lessons in housekeeping and primary education to European Jewish women at their Gibbs Street temple, but felt it would be more practical to establish a gathering place in the northeast neighborhood where the majority of these immigrants lived.

The new headquarters of the “The Social Settlement of Rochester,” opened at 152 Baden Street in 1902. It proved immediately popular. Some 300 women registered with the organization in its first year.

Sixty volunteer teachers constituted Baden Street’s original staff. Some helped new arrivals adjust to American life, while others looked after their children in the settlement’s nursery and kindergarten.

Though the non-denominational organization initially served women exclusively, as the settlement’s building expanded, so did its client base.

An assembly hall built at the back of the house in 1904 opened up a space to accommodate a variety of social and athletic clubs for boys. The hall’s basement, equipped with several showers and tubs, supplied free bathing facilities for neighborhood residents. The service was a forerunner of the public baths the city installed in 1908. 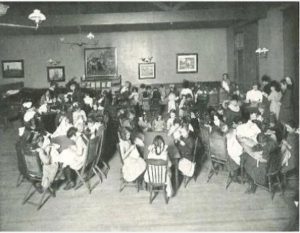 Baden Street’s dedication to health matters went beyond ensuring the cleanliness of its clientele. The settlement opened a dispensary in 1907 staffed by volunteer doctors and nurses. By 1915, 450 patients were being treated at the site every month. When the flu epidemic hit two years later, the dispensary was used as a medical center and the assembly hall was repurposed as an emergency hospital for men.

Health promotion would remain one of the settlement’s chief priorities, but Baden Street’s overall mission shifted at mid-century as the surrounding area stated to see changes in the demographic and their needs.

Although Eastern European Jews represented the primary residents of the institution’s neighborhood at the time of its founding, by the end of World War II, African Americans comprised over 50% of residents. As a result, Baden Street adapted its focus from Americanizing immigrants to addressing the social and health concerns of urban Americans.

Today Baden Street continues to provide a full range of services to improve the quality of life of the community served.

Committed to meeting the community’s ever-changing needs, Baden Street has launched a variety of employment, educational and human services over the past century to help improve the quality of life of its local population.

Though the clientele may have changed over the course of its almost 120-year existence, Baden Street Settlement is consistently known as a vital source of support for Rochester’s northeast community.

The Baden Street Settlement team are generous leaders at all levels. Several of the employees attended Baden Street as children and now work here to help others. Their empathy and caring are genuine as they know what it’s like to be in crisis and how hard it is to ask for help.  The Baden team continues to put the community’s needs first.   They possess the innate ability to inspire, lead selflessly and most of all, work from their hearts.